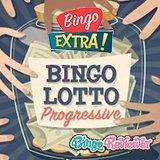 If there’s one thing Bing Extra does – and does well, it’s big (bingo) jackpot games, only here, when someone wins, everyone wins. Known as the ‘Bingo Lotto Progressive Jackpot’ (or PJP for short!), the pot starts at an impressive sum and continues to grow until it’s won.

But wait, there’s a twist…

…if you trigger the pot, you win, but so does everyone else in the room (with tickets into the game). Similar to that of the National Lottery, the aim of the game is to mark your lucky numbers off within the first 4 calls.

Nobody likes to share (you should see me with a big bag of Revels); however, these bingo games are so popular, what with the progressive pot starting at £5K and growing with every ticket bought. A whopping 80% of the jackpot will go straight into your bankroll and the remaining 20% will be shared with everyone else.

The PJP runs alongside your bingo games with no additional cost whatsoever. Head to the special 90-ball bingo rooms between 8am and 1am for 17 whole hours of bingo daubing thrills.

There’s something for everyone when it comes to bingo jackpots; little stakes or large. To give you a little heads up, we’ve scoured the rooms over at Bingo Extra for all the details on how to win (and when, where etc). If you fancy trying your luck, here’s everything you need to know:

…extra chances to win and a bonus of your own choosing wait to be discovered over at Bingo Extra. Will you choose a 100% bingo bonus or £100% slots bonus (to be played on hundreds of games) when you join?