News – It’s You Against the Banker (Do you Deal or No Deal?) 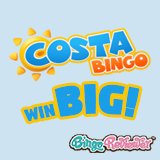 Fancy being a contestant of a popular gameshow with a shot at winning big? We guarantee there to be no auditioning, no contestants to steal your spot in the limelight and plenty of chances to win – are you up for it? It’s going to be you against the banker in the latest thriller to land at Costa Bingo, the only thing that’s missing is Noel Edmonds!

Created in partnership with Endemol Shine, Deal or No Deal Live is the world’s first 24-hour online gameshow with two hosts and around the clock fun. Instead of the 22 briefcases sealed red boxes, what you have is 16 identical sealed suitcases; half with blue numbers and the other half with red.

The unique, multi-layered game welcomes an unlimited number of players to play and deal…

…for a top cash prize. But before you go head to head with the banker, you need to spin the three-reel bank vault to gain access to the live game. This random (RNG) qualifying round will set the value of the multipliers within the briefcases – from 75x to 500x and only when you’ve qualified, will enter the game studio.

It’s a high energy contest of excitement, nerves and luck which players will recognise from the global television gameshow. In each round, a pre-determined number of cases are opened to reveal their numbers. After each round, the banker calls to offer a cash amount in exchange for your virtual case. The only thing left is to decide whether to ‘Deal or No Deal!’

Trade Up Your Game

Costa Bingo aims to please with their latest new game line-up, but to make things even more exciting, they’ve added a second live studio game – Evolution Gaming’s Monopoly Live! Created in partnership with Hasbro, Monopoly Live is a game based on the popular board-game, only you have a wheel instead of a board (at first).

To enter into the property trading board game with augmented reality, you first need to…

…place bets on where you think the wheel will come to a stop. Multipliers of 1x, 2x, 5x, 10x or chance, 2 rolls or 4 rolls. If you place a bet on the correct segment, you win.

Entry to the game comes when the wheel stops on either 2 or 4 rolls – the number of dice thrown will be determined by the number of rolls in which triggered the bonus. Throwing a double will award an additional throw. Each property houses a multiplier which can be increased drastically with the introduction of houses or hotels.

All familiar Monopoly board game elements such as Go, Chance and Community all appear on the board and there’s the ‘chance’ to boost winnings in the previous spin the wheel round – just land on that question mark and let the live host do the rest!