Casino’s story is one of success despite the odds. Russian casinos began to flourish in the nineties but as the millennium kicked in they became prolific. As of 2002, Russia was host to 58 casinos (30 in Moscow alone), 2,000 gambling parlours and as many as 70,000 slot machines that were loosely regulated and beginning to cause social problems. The Russian government, led by Vladimir Putin, identified this and acted decisively.

Solution? Close it down and move it out of the populated areas. On June 30, 2009, almost all of  Russia’s casino industry went dark. (This seems to have been a recurring Russian situation: The Soviets outlawed all gambling except lotteries in 1928 also.)

But there was hope. The solution was to allow Casinos to operate in four remote zones: Altai, Kaliningrad, Azov City and Primorye (Vladivostok). Originally licensed for 10 years, they were all extended with the exception of Azov that was moved to Krasnaya Polyana (Sochi). If this constriction of gambling seemed like a deterrent to investors, that has not been the case. Lawrence Ho made a beeline for Vladivostok. Caesars Entertainment kicked the tires on Azov City quite seriously before punting. Doomand- gloom predictions made at the time of the ban (such as that the casino industry was being set up for failure) have not been fulfilled. In line with Mr. Putin’s policy of stimulating economic growth in newly developing regions with gaming, the Crimea has been ear marked as the next zone of casino expansion. 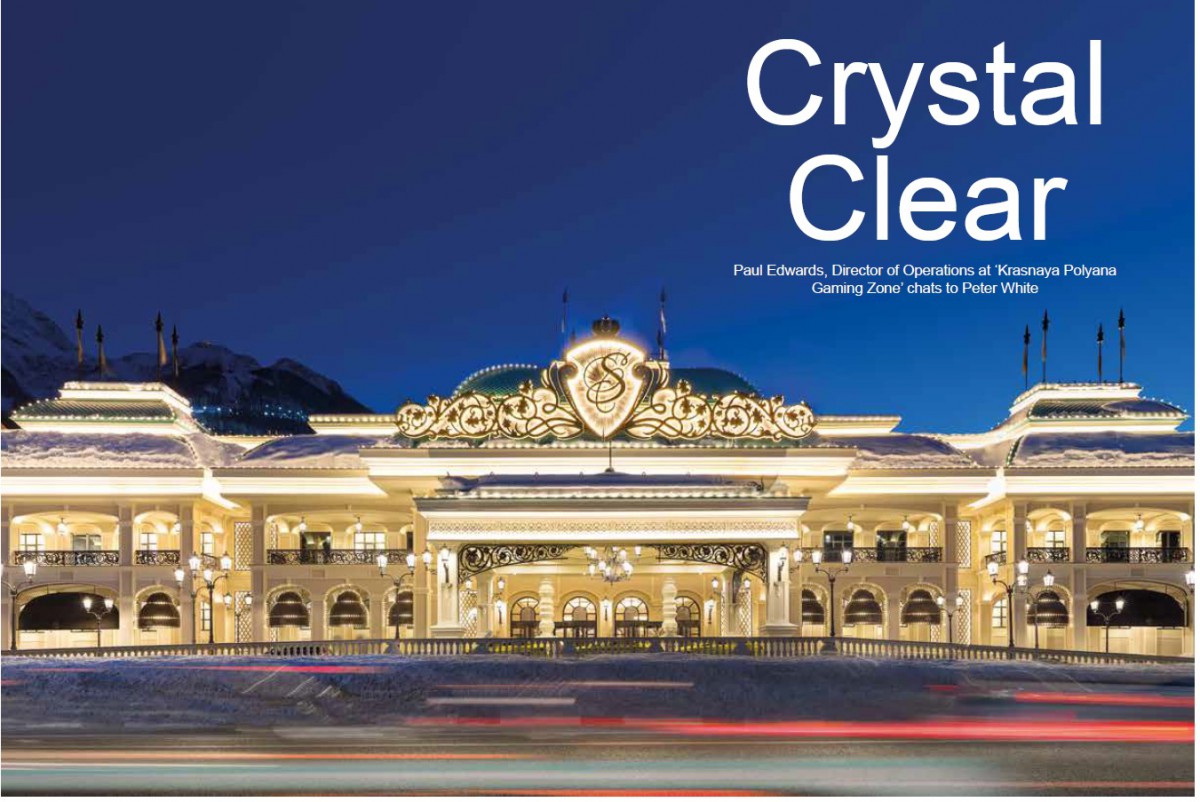 Casino Sochi is one of the success stories. Founded in the city that was put on the map with the 2014 Winter Olympics, at 33,000m2 it is perhaps small by American standards but able to comfortably accommodate 2500 players at any one time. It has 569 slot machines, up to 140 gaming tables – Blackjack, Roulette, Baccarat, Russian, Texas Hold’em & Stud Poker, among other amenities. It even has a dress code, something you’d never find in Las Vegas or Atlantic City. Its external appearance is elegant and designed to complement the surrounding alpine resort.

Director of Operations Paul Edwards, like many top managers today in operations started from the ground up – originally taking a blackjack course, and accumulating experience from the many casinos and countries he worked in. With 22 years of experience in Russia, Casino Sochi lured him away from Lawrence Ho’s Tigre de Cristal in Vladivostok to direct operations for this showpiece Casino in the newly formed gaming zone. In this conversation with Casino Life, Edwards discusses the attraction to Sochi, the Krasnaya Polyana gaming zone, the effect of the World Cup on the city, the importance of poker—another stark difference from the U.S.—and the future of the junket business, among other topics.